It was a busy gardening weekend last week.  The extra day, a bank holiday in the UK, was spent helping out at the Finchley Horticultural Society allotment NGS open day.  Fortunately after the wash out that was Sunday, Monday remained dry and the allotment looked verdant.  Of course I was tempted by the plants the growers had for sale and I came away with this:

A persicaria – labelled as ‘pink’ so I can’t add any further information.  It goes some way to my getting persicaria into the garden but I am on the hunt for some of the dark red ones.  I planted it next to the salvia ‘Blush Pink’ bought earlier in the summer and I hope they will be happy soul  mates.

I singularly failed to record the other great gardening activity of the weekend which was the apple picking.  It was a smaller crop this year, both in numbers of apples and size.  Some were little bigger than a golf ball but as they all go for juicing they were all picked.  In about a week I will know how many bottles this year’s harvest produced.  The bent double apple tree of a few weeks ago is now nearly horizontal so I took a picture of that!

Every week I think about including this Cleome ‘Senorita Carolina’ in the six but for some reason it stays on the sub’s bench.  This week it makes it into the team.  I really don’t know why it has taken me so long, it’s been flowering like this all summer.  The real colour is slightly less vibrant than captured here.  It’s a tender plant so if the winter is anything like last year I shall probably lose it.

Just coming into flower is the Anemone ‘Honorine Jobert’.  Earlier in the year its poor leaves were scorched by the sun but as the season moves on it’s site is more in the shade where the splash of white shines through.

Also adding some brightness are the self seeded calendulars that spring up around the garden.  The insects seem to like them too.  The ones on the veg patch are dropping seed and new plants are already growing. 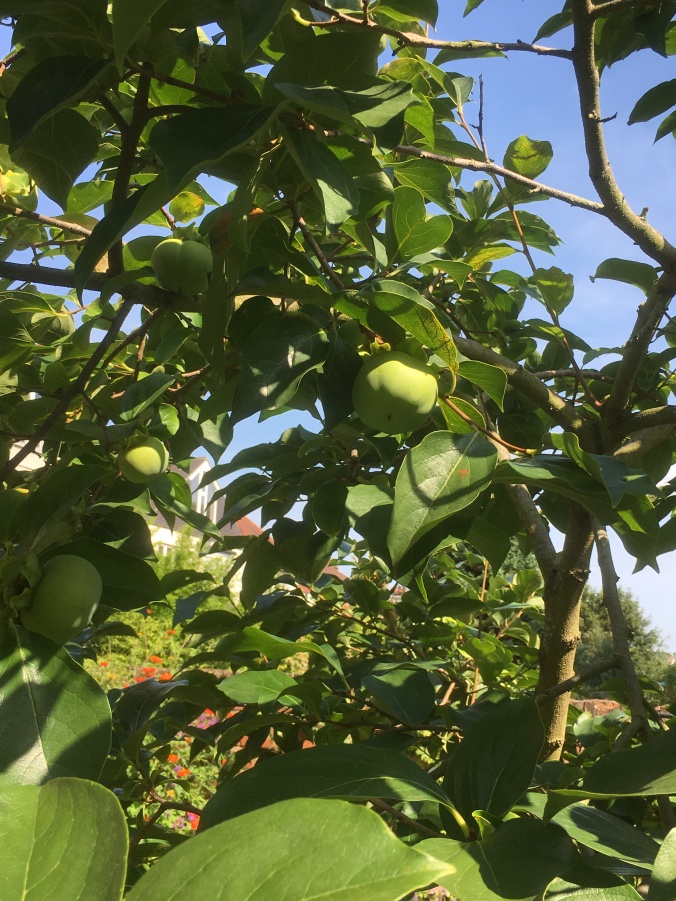 Given the size of the apples this year I was surprised and impressed by the persimmon fruits.  They are much larger than last year and although I am not a great fan of the fruit I do enjoy their orange colour as they ripen in November.

That’s my six for the week.  There are plenty more to view at The Propagator.  If you stop off there I recommend you also read his Garden Blogger’s Hierarchy of Needs a brilliant summary of what gardeners do and why they sometimes post and sometimes don’t. I hope you all find time to garden this weekend – that’s the important bit.