I was going to dial in my apologies for this week.  There is much potential in the garden but could I really subject you to six photos of emerging shoots.  Could I cobble together something or would it end up a busted flush?  Well the social streak in me is strong and I enjoy being a part of the #SixOnSaturday meme so here I am again. 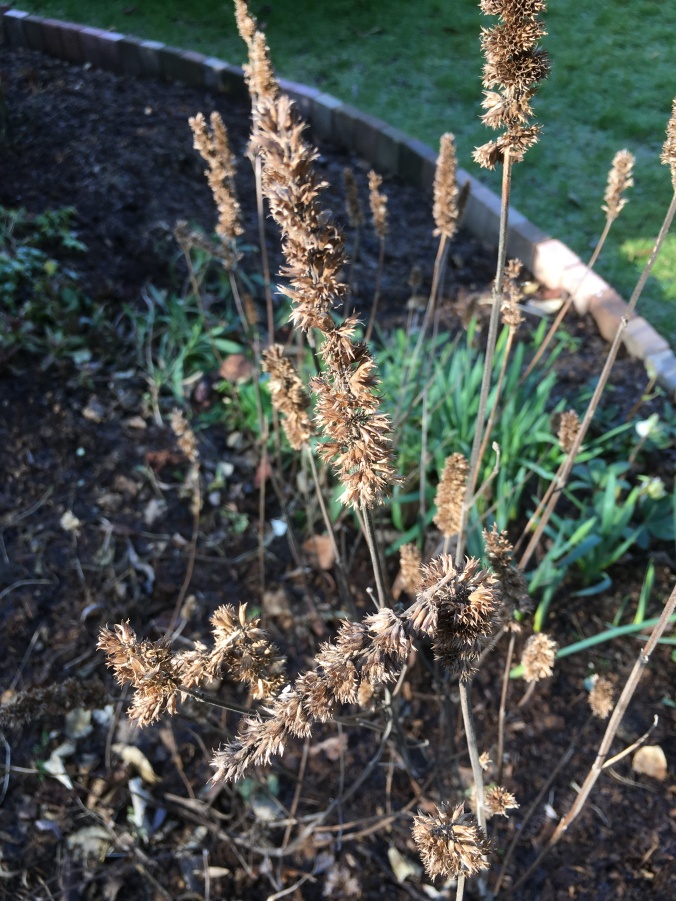 As the new growth on the perennials comes through I cut back the old stems.  But the seed heads on these Agastache foeniculum can provide some winter interest in the border for a while longer.  They are  ‘Alabaster’ and give lovely white spires of flowers for the butterflies to feast on in the summer.

Other plants do not fair so well over the winter.  Here are two plantings of Stachys byzantina ‘Silver Carpet’.  Those planted at the sunnier end of the border are holding their own but those at the shadier end are disappearing fast.  This is their first year in the garden so it will be interesting to see if they pull through.  But if not, I have the spot at the shadier end earmarked for some more hellebores.  It’s so important to have the right plant in the right place!

Yes, here is another hellebore photo.  I am becoming a great fan of them and love it when the white ones catch the sun. 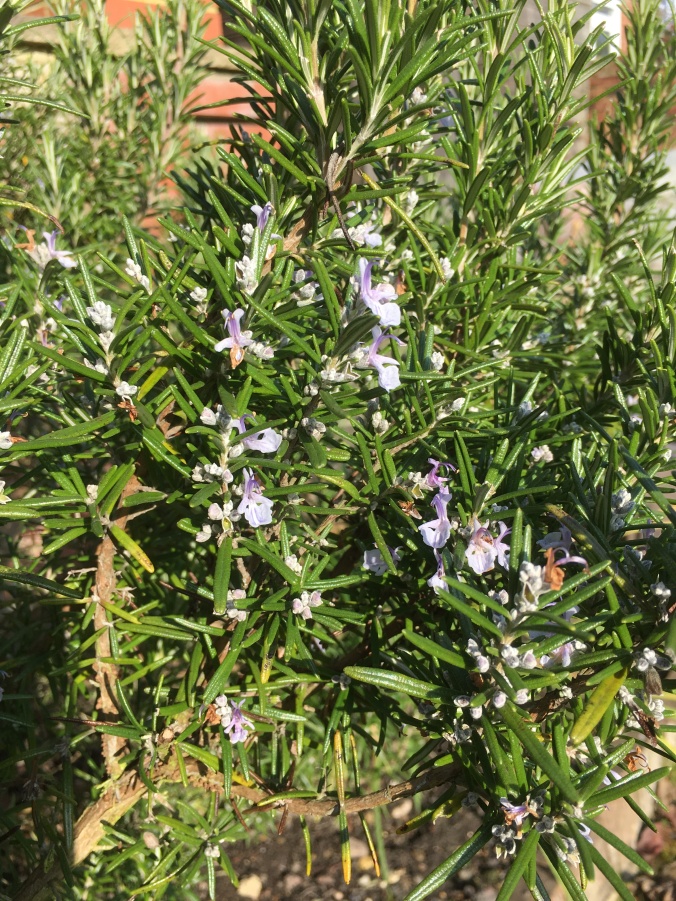 There was a tweet in the week about a rosemary being in flower.  Yes, it is in my garden too.  This border has the sun from early morning to mid afternoon and with its back against the brickwork the rosemary does well here.

And here’s where I bust my flush!  It’s an emerging shoot.  No apologies for being excited to see so much new growth on this iris.  It is an allotment share from a well established clump and has a lovely tall stem with white flowers but I don’t know the variety.  I’m looking forward to the warmer weather and this shows that spring, although postponed for a week,  is on its way.

The Propagator is the place to go to read more #SixOnSaturday posts, just what’s needed after a chilly session in the garden.

After a productive morning in the garden I now present my #SixOnSaturday.  And it is not quite as I anticipated.  My plan was to sow a few seeds and get the pruning of those blackcurrant bushes finished off.  It was a frosty start so I thought a light brushing down of a few cobwebs in the potting shed would be a good warm up.

We all have our favourite tools and for me brushing down the cobwebs is done with the old brown brush.  First I had to find it.  So the rickety old shed was emptied out.  The brush was found about half way through the emptying but I’d started so I had to finish.  First job of the day turned out to be a spring clean of the shed.  The second job – look away now if you are faint-hearted – was also shed related.  If you are ready, read on.

The dangers of plastic bags to wildlife are much in the news and I can only think that this rat fell foul of one my garden refuse bags.  I’m not a great fan of sheds at the best of times and my survival instincts were on the alert for large spiders.  I was not expecting to find this.  But it was dead, recently so I think, and so I coped rather well.  Disposed of it, had a cup of tea and with nerves steadied, moved on to brush down those cobwebs.

Whilst I had my feet up in January, those more resilient than I were washing down greenhouses, washing up pots and scrubbing plant labels clean.  Well today I made a start on a few of those jobs in preparation for a little bit of seed sowing. Once some of those jobs were done, sweet pea Black Knight, Gwendoline and Anniversary were planted in root trainers and the first rocket seeds were planted in modules. I decided against planting the half hardy antirrhinums as the greenhouse is on the cold side and I think they can wait until early March. As a bonus I’ve included the latest photos of the autumn sown love-in-a-mist and end of summer penstemon cuttings. 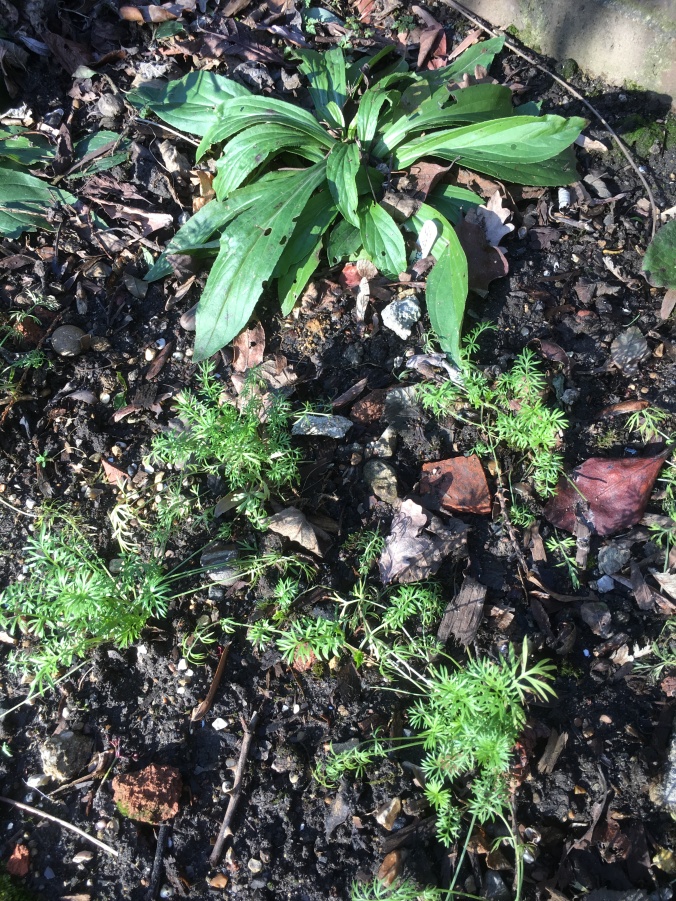 I sowed the love-in-mist in seed trays and when I potted them on I took the chance of planting a few directly into the soil.  They have survived the winter so far.  In the background is one of the foxgloves sown from seed last year and planted out at the same time.  The foxglove should be in flower this year.

A little dot of colour to end on.  The first of the anemones has pushed through and opened out.  I had thought the autumn mulch had buried them, but one or two are beginning to appear. 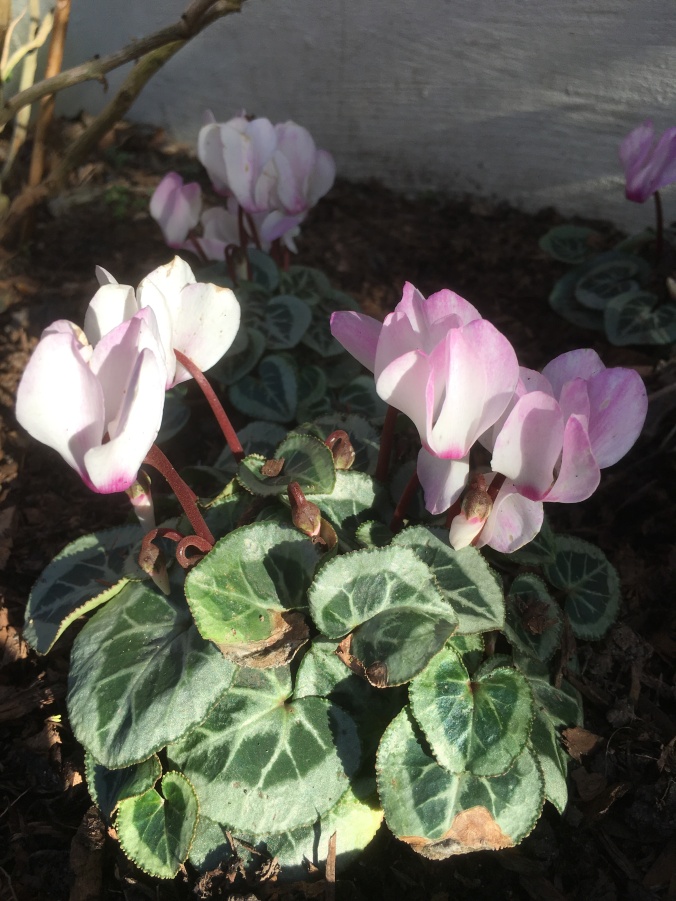 The half price tray of white cyclamen bought a while ago are evolving.  They have begun to take a gentle pink blush.  I wasn’t expecting this either but I find it far preferable to the dead rat.

For more garden excitement from around the world go to The Propagator for this week’s links to a lovely selection of six on saturday, generally horticulturally related but with the occasional meander off the garden path.

The fair weather gardener in me has  been dominant this week.  The temperatures are low and the lawn and borders are still squelchy and sticky.  I did refill the bird feeders, pull a few weeds and tie in a stem here and there but very little else was done.  Here’s my six:

The new borders are going into their third summer.  The first was spent weeding, digging, suppressing weeds and feeding.  The second saw some perennial planting with annuals.  This year it is the turn of bulbs.  A mass planting of tulips and alliums took place in autumn and, with no apologies, I was very excited to see the first emerging shoots of allium Mount Everest pushing through.

The last of the cutting back was done recently.  The sodden brown remains of iris siberica were removed and there was more delight to be found in seeing the first signs of the new growth.

Over on the veg plot the onion and shallot sets are progressing.  I’ve kept the covers on to protect them from the birds but it is good to see there is strong growth.

Every March I settle down to watch the new series of Gardener’s World and every year Monty brings out trays of seedlings he has sown in the depths of winter.  They are all ready to drop into the beautifully prepared soil for early harvests. This year I have got wise and I check in with Monty’s website each month.  Eureka!  Now is the time to plant your rockets seeds.  I’m going to put mine into modules so that I too will have a tray of plump rocket seedlings ready to drop into my beautifully prepared soil!

My tray of violas from last week’s six was planted up and they are smiling away at the bottom end of the garden.  A good enticement for me to get out and about.

Gardeners are generally sharing souls and this little pot of persicaria red dragon was given to me by a friend.  I’ve just got to find the right place in the new borders for it.

That’s my six.  For the links to a great many other sixes go to The Propagator.  You will find a treasure trove of good gardening from around the world.

Having spent the last few days wondering if three or three and half on Saturday would pass muster I finally knuckled down and came up with six.  It may sound as though it’s an onerous task to post weekly.  But no,  I am enjoying the discipline of looking at the garden in a focused way.  It may even be making me a more productive gardener! 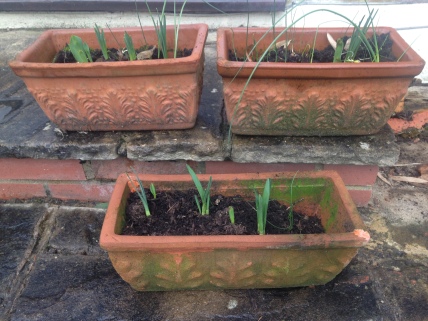 A week or so ago I succumbed to this impulse buy from a supermarket.  Of course, when I arrived home I thought where on earth am I going to plant them?  Their pretty little viola faces seemed rather dwarfed once positioned in the garden.  This week serendipity struck.  I remembered I had three neglected terracotta troughs.  I think they will be just right for some block planting and then I can place them along one side of a raised bed.  Perfect.

Inspired by a tweet from Waterperry Gardens in Oxfordshire I am sharing with you my borders in February.  First is the border that was extended in November.  The line of snowdrops and emerging daffodils under the hedge shows where the old border ended.  They will be moved to the front after flowering.  The roses were planted in November: three Darcy Bussell and a Jaqueline du Pre.  Perhaps now I need an artistic rose to complete the cultural theme. 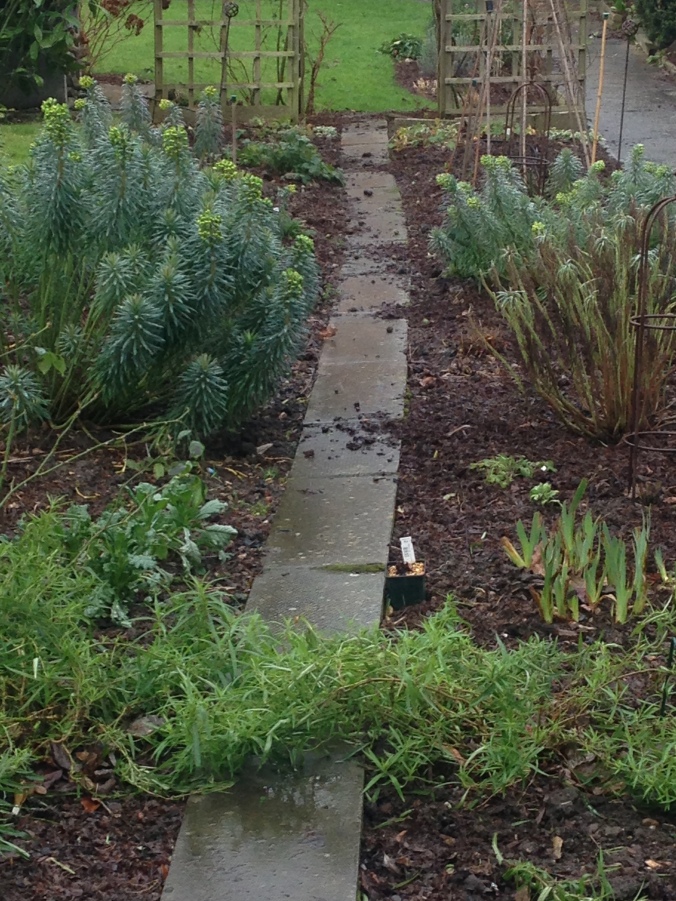 This is my long border. As you can see the foxes/squirrels love spreading the mulch around.  I have used roses and euphorbia as the framework and I am filling in around them with astrantia, gernaniums, scabious, penstemon and a variety of annuals. The borders at Waterperry are famous for their careful staking of plants.  Here’s a tip from Pat Havers, Head Gardener there.  They start staking their perennials in April.  I always leave my staking until it’s too late.  This year I will do better. 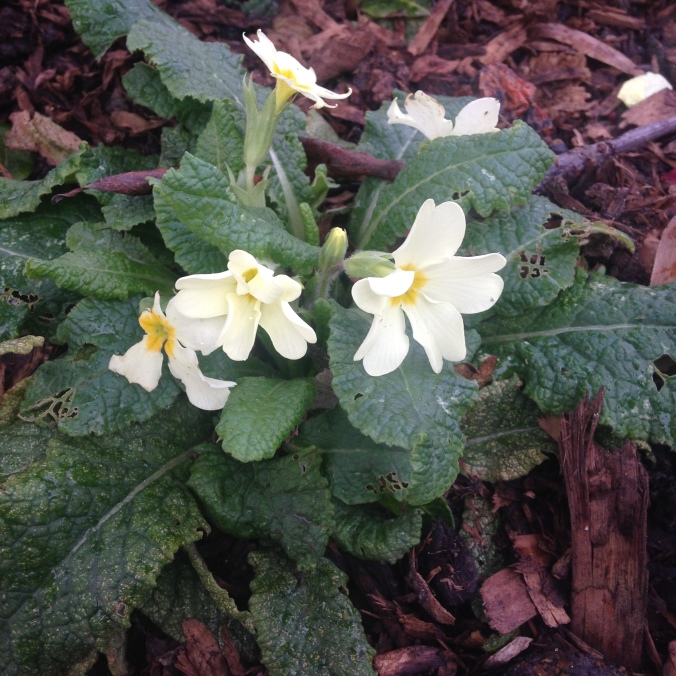 Last week I mentioned that I prefer primula vulgaris to the stronger coloured primroses appearing in the nurseries.  The brightly coloured versions add colour at this time of year but the pale yellow of the common primrose is always the winner for me.  I grow them in my spring corner.  First the primroses and snowdrops appear, followed by anemones, bluebells and aquilegia and then I am hoping last October’s planting of pheasant eye narcissus will steal the show. 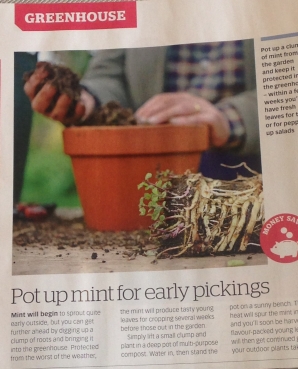 And lastly, the February issue of Gardeners World came to my rescue.  Mint is beginning to come through now and they suggest breaking up small clumps of it to pot up for the greenhouse.   This will give an earlier crop.  The perfect job for the weekend.

There’s a cold spell ahead and it’s a gloomy day today, but there is always something to enjoy.  I hope you find time to garden or to reflect on your garden this weekend.  It’s a lovely thing to do.  More international gardening thoughts can be found at The Propagator who hosts this meme.