I’ve definitely had the feeling of losing the battle this week.  Slugs and snails are eating their way through the young plants – cosmos, lettuce, borlotti beans are high among the casualties.  The parsnips are refusing to germinate – third sowing and the last! And it looks like the fox has taken a shine to wandering through the agastache at night. I’m also losing the battle to keep everything watered, no rain and the water butts are empty again.  It looks grim.  But this is Saturday and optimism rules:

Definitely reaching the heights are these delphiniums, I think they must be six feet tall.  Taken as a division from the parental garden many years ago, they were divided again when we moved here and I am very pleased to see them thriving this year. I was meticulous about staking and tying them in but they have exceeded my expectations! 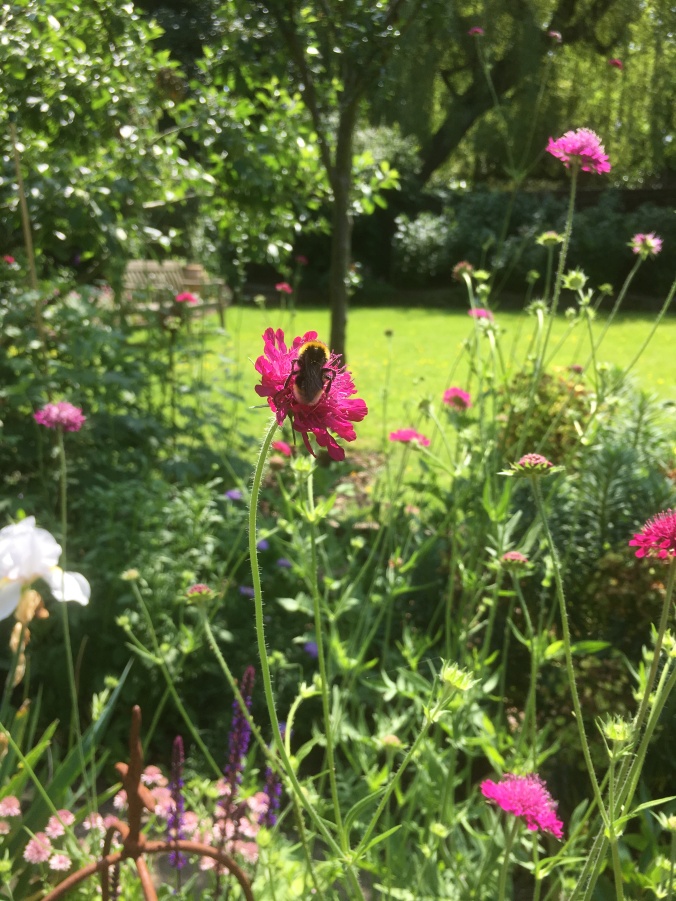 Also climbing upwards are the stems of Knautia macedonica.  These were planted out from 9cm pots last autumn and have settled down well.  They seem slug proof unlike some of the plants I have recklessly invested in.  Fortunately I remembered to stake them – just in time.  The bees love them.

Down in the foothills where most of the slug damage is being done are these delightful dianthus deltoides.  They sulked after the garden move last year but have come good now.  No damage to report.

Up again in the heights is this lovely clematis, inherited from the previous owner.  I thought I had killed it last year as I tried to separate it out from the bindweed and lemon balm but it made a comeback.

A combination of higher foothills and the heights is provided by the lovely rose Blush Noisette and the Astrantia Claret featured in an early six. 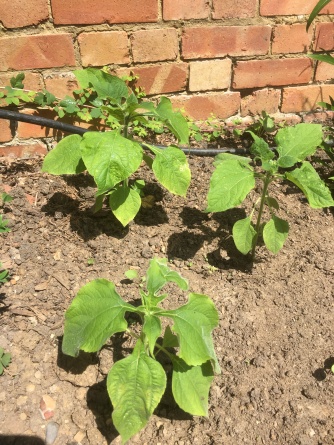 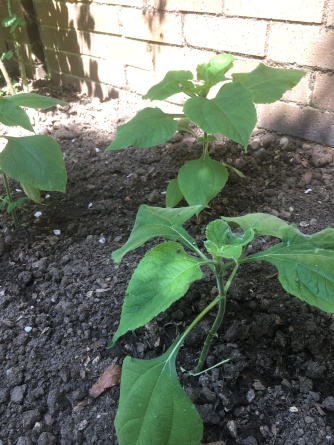 And seeming to be safe in the foothills but, I hope, heading for the heights are these Tithonias.  Grown from seed, one group was planted out a few weeks ago, straight from modules into the ground.  The other group I potted on, returned them to the greenhouse and finally planted them out in the week. This group has made much more growth.  So it looks like potting on is the best option.  The final height is said to be 8 feet.  I’ll report back!

It’s June and I hoped I would be pottering by now.  Well almost, I have some spare cosmos and some zinnias which really do need to go out.  And I’m going to count watering as pottering – so nearly there.  I hope you are too.  Take a look at  The Propagator’s blog , where you’ll find the host of this meme, the ‘rule book’ and all the links to other sixer posts.

25 thoughts on “Six On Saturday: Reaching the heights or lost in the foothills?”